To gauge how business is developing in the European plastics industry, PIE – Plastics Information Europe conducted its 7th Readers Survey in January 2022. The questionnaire was made open to PIE subscribers and other industry players, and saw more than 420 participants from across Europe. 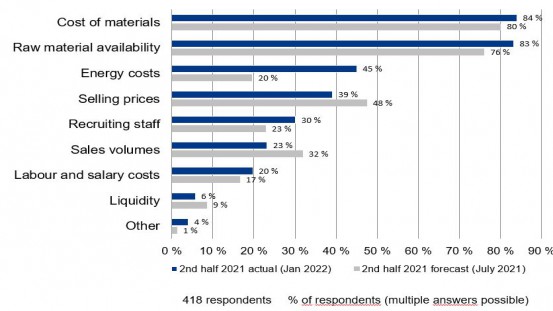 Positive reports and optimistic expectations predominate the current situation in the European plastics industry. Three-quarters of the Pie survey respondents rate their business performance in the second half of 2021 being better than in the first half, or remaining stable, and about 90% of all market participants expect an upswing or at least stability in the upcoming months, combined with investments and staff increases.

The bad news: material, energy, shipping costs, and availability continue to weigh heavily on the outlook, even though the direct impacts of Covid-19 no longer seem to play a central role. Diversification among suppliers and alternative plastic material choices could be the solution, according to most of the respondents.

As for the hot topic of circular economy, pressure is mostly being turned into motivation, to change things around. And last but not the least, politics too has a major role to play here.

Across Europe, just under half of the respondents reported better business in H2 2021 than in the first half, with just under a quarter reporting a deterioration in business. However, the expectations for H2 2021 were more optimistic in 2021 summer: at the time, 88% of survey participants expected better or unchanged business – in January 2022, this is being echoed by just under 76% of the companies.

While more than half of the participants from German-speaking Europe, Italy, and the UK & Ireland stated an improved company performance in the second half of the year, the assessment in Central & Eastern Europe was worse: only a third described the business trend in H2 as better, compared to H1 2021. By sector, plastics recyclers did the best business by far, both domestically and for export, followed by raw material producers, and plastics machinery manufacturers. The foreign markets of the EU27+CH, NO, UK rated significantly worse in H2 than domestic and export together: here only a good third indicate a better performance. Business activities in the rest of the world apparently fared even worse: whether it was pandemic-related or due to supply bottlenecks.

Nearly 89% of companies said they plan to invest at least as much or more in 2022 than they did in 2021. The only areas where fewer than 50% of the firms said they would raise outlays this year were in the Nordic region, Southeastern Europe, the British Isles, and the Iberian Peninsula.

Half of those surveyed said they would use capital investments this year to expand operations, with over a third planning to spend their money for streamlining and minimising costs; 12.1% said they were focused on replacing equipment. More than 65% of Italian companies reported that they want to invest in expansion, followed by 60% in German-speaking Europe. Over half of Southeastern European firms said they were focused on streamlining and cost reduction.

At this point, it’s a given that the coronavirus has shaped the concerns of the European plastics industry over the past two years. In 2021, the second year in which the world economy was slogging through the pandemic, companies in the plastics industry cited the cost of materials and feedstock availability as the top two concerns, with energy prices in the third position. As reported by PIE in July 2021, in the first half of last year, the major concerns were exactly the same and seem to be competing for the top spot. Other major issues quoted by several companies were logistics costs, shipping woes, sales volumes, staff recruitment, and salary costs.

In Italy, nearly 98% respondents said both material costs and feedstock availability were their biggest concerns, followed closely by Spain & Portugal at some 90% for material costs, and France at 95.2% for feedstock availability. It is hardly surprising that 100% of respondents from the plastics machinery industry reported material prices as their main issue. About 93% of the brand owners, on the other hand, said feedstock supply remained their biggest worry in 2021. In the first half of 2021, nearly all plastics producers, compounders, distributors, and product traders had complained about the lack of availability for feedstocks.To underline the obvious, these problems also remain the top two concerns for 2022.

Rising energy costs also reared their ugly head in the expectant worries for 2022, with the most concern coming from the plastics recycling industry and brand owners. Climate action programmes, in contrast, failed to rank among the highest challenges for the industry this year.

Circular economy remains a key topic with many facets

Despite all the other concerns, circular economy remains a big issue for Europe’s plastics industry – with multiple challenges and just as many opportunities. The 7th PIE Readers Survey asked companies what they see as the main drivers of their climate action and resource efficiency measures. A good third of the respondents said customers, suppliers and competitors are the main drivers of their environmental activities. Only every fifth company seems to be self-driven enough to be acting out of its “own drive”.