At formnext 2021, Arburg wowed trade visitors with numerous innovations for industrial additive manufacturing. Many international visitors also travelled to the world’s leading trade fair in Frankfurt to find out first-hand about innovations and trends in the AM industry. Arburg’s international team of AM experts put on a strong show together with InnovatiQ. The highlight was the world premiere of the high-temperature Freeformer 300-3X, which processed medically approved PEEK granulate to produce skull implants. 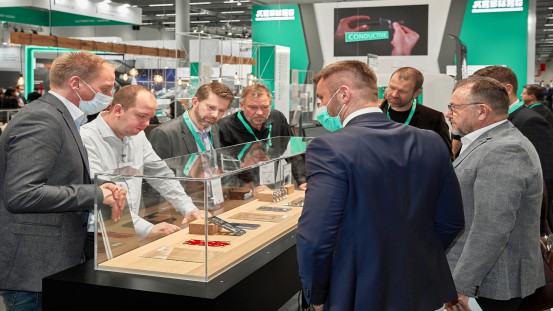 Application example: tesa. The world-famous company uses the Freeformer to turn adhesive in the form of granules into thin adhesive layers.

“As an original exhibitor and member of the trade fair advisory board, we have been actively involved for years in making formnext the central meeting place for the AM world. We are pleased that we made a successful appearance at this year’s trade fair despite a difficult environment,” said Dr Christoph Schumacher, Head of Marketing at Arburg. “Arburg’s prominently positioned stand was visited by many international visitors, who were very interested in our innovations and solutions for industrial additive manufacturing. Our experts engaged in many valuable discussions and received interesting enquiries.”

At formnext 2021, Arburg presented the world’s first high-temperature Freeformer 300-3X, which processed the medically approved PEEK granulate Vestakeep® i4G from Evonik into skull implants. The machine’s build chamber can be heated to 200 degrees Celsius and the plastic material to up to 450 degrees Celsius. Visitors were also able to see for themselves how the process quality of medical technology products and other safety-relevant components can be reliably documented and traced back 100 per cent using the “ProcessLog” customer portal app.

Numerous products from AM practice showed that Arburg Plastic Freeforming (APF) covers a wide range of applications – from resorbable implants and sophisticated PP components to complex hard/soft connections. Also on display were items such as flexibly adaptable operating equipment, electrically conductive components, and soft shoe soles with a honeycomb structure. Part highlights from world-famous Freeformer customers, such as customised baseball bats from US sports goods manufacturer Wilson and wafer-thin adhesives from adhesive solution expert tesa, also met with a great response. In addition to Arburg’s Freeformer exhibits, innovatiQ’s portfolio was also on display at the stand. From 1 December, both divisions will be bundled under the management of Dr Victor Roman in a new subsidiary, ARBURGadditive GmbH + Co KG.