Around 120 people attended the 2019 ALS user meeting in Lossburg, which took place on 14 November. As part of the meeting, Arburg experts from the control system group provided a wide-ranging overview of the latest features of the Arburg host computer system (ALS), as well as explaining how it is used and how it is integrated into the arburgXworld customer portal. The success story of ALS user Boelhofff, meanwhile, provided a fascinating glimpse into its practical use. 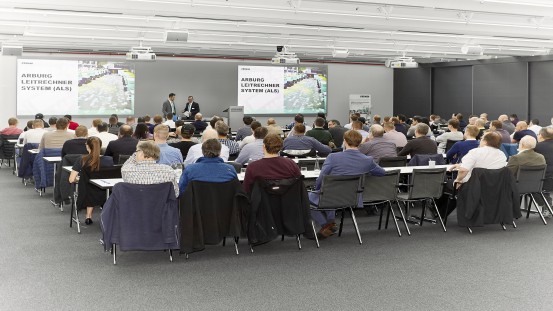 “It is vital for us to forge great partnerships and maintain open dialogue with our customers,” said Axel Kinting, control systems team manager at Arburg, summing up the significance of the ALS user meeting. Various Arburg turnkey systems were presented live on the evening preceding the meeting to stimulate a bit of thinking outside the box. The evening event which followed then provided great opportunities for networking and a lively exchange of ideas.

“It is clear that use of the ALS clients and the mobile applications is increasing,” says Axel Kinting. The user meeting involved the presentation of a range of new features that make the host computer system even more straightforward and easier to use. One feature, for example, allows the production aids to be assigned to the relevant machine in the form of parts lists. The process status can now be closely managed as well; for example, in order to display the process approval from Quality Assurance in the ALS. Details are now collated and displayed more conveniently and in a customised way, making the client more user-friendly. Another new feature is the mobile maintenance client. This means that maintenance planning and due dates from the ALS maintenance module can not only be displayed on a mobile device, but also used as interactive check lists so that items can be ticked off and acknowledged. The brand-new machine terminal features one display interface per machine which provides all the information that can be individually selected.

The SCADA system Arburg Turnkey Control Module (ATCM) which was presented at the event forms a key link between complex turnkey systems and MES systems such as the Arburg host computer system. It collects, visualises and transfers all relevant process data. The ATCM can also display the important functions of the complete production cell via a human-machine interface (HMI) terminal with touch panel. Data transfer is carried out primarily via the OPC UA communication protocol.

A key part of the discussion revolved around linking the ALS data with the cloud-based customer portal arburgXworld. All machines with an IIoT gateway already provide visual representations of selected production parameters via the “Process dashboard” and “Machine dashboard” arburgXworld apps. All ALS users are also able to use the “ALS dashboard” app to call up this processed data – covering all production locations – on a mobile device of their choosing, providing a quick overview of how production is progressing.

Boelhofff – all machines integrated into ALS

The Boelhofff Group success story provides a fascinating insight into how it works in practice. Boelhofff is a global leader in manufacturing and distributing connecting elements and installation systems. Jens Placke, part of IT Projects, Processes and Consulting at Wilhelm Boelhofff GmbH & Co. KG, looks after the Arburg host computer system from an IT perspective and reported on how the system is used across the company. Alongside 123 injection moulding machines, 274 metalworking plants are linked up by the ALS, which forms a global network with the Boelhofff production sites. The data is retrieved via mobile terminals. Custom displays that show how much a machine is being used, for example, were factored into the development of the ALS by Arburg control systems as a result of feedback, which proved very popular with Boelhofff.

Axel Kinting summed up the results of the ALS user meeting nicely: “The feedback from our customers was resoundingly positive. People found our programme interesting and informative, including the information about the visualisation of the ALS data via the new arburgXworld customer portal. As the Boelhofff example shows, we can take into account the constructive feedback from our customers as we continue to develop our host computer system.”