First one then two 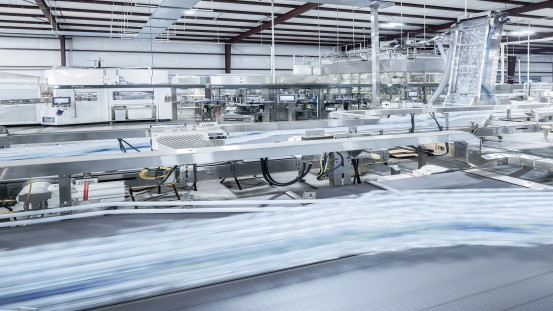 The Richmonds from Florida are real pioneers: when in 1991 Karl and his wife Margaret acquired the Silver Springs Bottled Water Company, founded six years previously in Ocala, Florida, bottled water in the United States was still a total niche market. The Richmonds firmly believed in the future potential of Nature’s very own thirst-quencher, however – at a time when the favored refreshment of the regular consumer in the land of Pepsi and Coke was the sweetened soda pop. The couple’s boldness was rewarded: water may not have topped sugary soft drinks in popularity in the USA until 2016 yet in the many years en route to this success the Richmonds have enjoyed growth rates of 20% and more. Where at the outset they managed to meet demand with just six employees, in the meantime several hundred people work for the com pany at its now four sites dotted along the east coast. The business keeps the whole family busy: father Karl turns up for work every day despite his grand age of 85 and sons Kirk, Keith and Kane share the tasks of executive management and responsibility for the various production facilities. With grandsons Kiel and Mason the third generation of the family has also long been bottling water, with them now running one of the biggest independent bottling operations in the United States.

The Richmonds’ instinct for market opportunities isn’t the only factor which has paved the way for their success; they have also demonstrated plenty of technical foresight and been lucky in their choice of reliable partners. “Our companies have been working very closely together for almost 20 years,” says Alcides Vieira, Vice President of Sales & Marketing KHS USA, when describing the strong relationship the two businesses have. “The Richmonds have always been among the very first to opt for our new technologies. In 2008, for instance, they invested in KHS’ latest InnoPET BloFill stretch blow molder/filler block. And in 2017 they were the first to commission the KHS InnoPET TriBlock with a labeler integrated between the stretch blow molder and filler.” Besides a certain amount of the aforementioned pioneering spirit, this also requires a high degree of trust on the part of the customer – and a convincing performance by the line supplier.

This is confirmed by Kane Richmond, CEO of Silver Springs. “We of course work in a people’s business where mutual trust and long-term relations play a central role. What we especially value in KHS above and beyond this, however, is their absolute determination to innovate and their flexibility in finding solutions when special challenges sometimes have to be met.”

This often goes hand in hand with the launch of new technologies. This was also true of the installation of the first InnoPET TriBlock at the RealPure Bottling Company in Magee, Mississippi, acquired by the family in 2017. The new pre-glued method used here prevents open bottles from coming into contact with hot melt vapors as in conventional labeling as the prepared labels are already coated in adhesive. The operators were at first skeptical of the new process yet were quickly convinced by the stable procedure –and by the fact that there was no longer any need for regular maintenance involving the arduous removal of residue adhesive. Any workforce is ultimately pleased with innovations which make their work easier.

Kane Richmond of course also has the key eco nomic figures in focus, such as his return on investment and overall operating costs. “Every cent counts – especially for us as a supplier to the major sales markets,” he emphasizes. “And for a company which produces 24/7 our priority is how reliably the system can be operated with the least cost and effort. In this respect all of our KHS lines are distinguished by their enormously high degree of availability.”

This also considerably eases the work of plant man ager John Bickerstaff who for 13 years now has worked for the RealPure Bottling Company founded in 1917. “The labeling process is a composite part of the TriBlock and must run at the absolute highest level of availability, effectiveness and quality,” he states. “Also regarding ease of maintenance and production reliability along the entire line we’ve had top results right from day one with the pre-glued technology.” He puts this down not just to the innovative labeling method but also primarily to the continuous neck handling of the lightweight bottles which protects them from mechanical stress during production.

The Richmonds are also eager to attain further pioneering status when it comes to sustainability. One of their chief concerns is that they reduce their bottle weights and thus the amount of PET used. “With the help of the experts from KHS’ Bottles & ShapesTM program and our preform manufacturer Plastipak we’re setting a new lightweighting record with practically every new product we introduce,” smiles Kane Richmond. “In Magee we’ve been using 500-milliliter PET bottles which weigh just 7.8 grams since 2017 and on the brand new TriBlock in Ocala the containers only clock up seven grams on the scales.” Kane admits that with a recycling rate of a mere 30% the USA is no trailblazer when it comes to cutting down on plastic waste. However, the growing health awareness of his fellow countrymen and women, who are turning to bottled water with ever greater frequency, is being echoed by an increased sensitivity to the issue of sustainability. Of this he is convinced. He even suspects that the recycling rate among people who buy water is already much higher than among those who purchase sweetened beverages. At his company Kane does what he can. This includes recycling his own PET waste – where he’s soon to achieve a quota of 100%.