There will be more than 40 Italian companies taking part in the Italian collective organized by Amaplast - the trade association, member of CONFINDUSTRIA, including over 160 manufacturers of machinery, equipment, and moulds for plastics and rubber processing - at the twenty-third edition of the specialized exhibition in Moscow on 28-31 January 2020. Approximately twenty other Italian companies will also participate, either on their own or via the stands of their local partners. 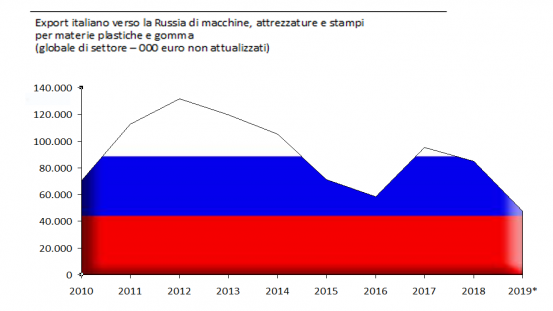 In spite of the increasingly turbulent international situation and the oscillating trend in invest-ments by Russian converters, the number of exhibitors from Italy is holding steady, while the ex-hibition space they occupy has actually increased, now up to 800 square metres, with respect to earlier editions. As usual, Italian businesses are among the best represented at Interplastica.

Our exhibitors have also shown a certain interest in the show-within-the-show titled “Recycling Solutions” dedicated to recycling technologies, debuting at the annual Russian fair in Hall 8.1. At a time when the environment and the circular economy are increasing hot issues, attention is growing in Russia as well for plastics recovery and recycling, and Italian manufacturers are ready to provide technologically advanced plants and systems to the Russian operators.

Unfortunately, the local market is showing signs of instability, as is reflected in the trend in ex-ports of Italian machinery for plastics and rubber processing. Looking back over the past, after a few years of contraction, exports to Russia recorded a new peak at 95 million euros in 2017, in 2018 this value had already dropped to 85 million, then stopping at just over 47 million in the first nine months of 2019 (according to the latest ISTAT information).

Russia nevertheless remains an important outlet market for Italian manufacturers of technology for the processing of plastics and rubber, particularly for the most sophisticated and customiza-ble systems for the production of high quality products such as food packaging.

Italy’s principal competitor on the Russian market is Germany, which has also witnessed a down-turn in sales, at least according to data from September: after the trough of 121 million euros in 2016, the value of German exports rose to 149 million in 2017 and 159 million in 2018. However, it struggled to reach 90 million euros in the first nine months of 2019.

Beyond the cyclical market fluctuations, Italy and Germany are also evidently affected by the im-pact of sanctions on Russia, which have instead worked to China’s advantage: after reaching 121 million euros in 2016 and then coming close to 160 million in the next two years, Chinese exports of plastics and rubber processing machinery reached 136 million euros in the first nine months of 2019, with prospects for year-end results of over 180 million euros, evidencing a strong upward trend.

The decrease of Italian exports to Russia takes place in a context of weakness in the Italian plas-tics and rubber machinery industry, which is affected by the many unknowns and critical issues characterizing the current world economic climate.

The year-end result is thus expected to be negative across the board.

italian market for plastics and rubber machinery, equipment and moulds ( % 2019/2018)

There is some concern among machinery manufacturers about the rather dim prospects for both the domestic and foreign markets, leading to a tendency among customers to reduce or defer investments.

At this point it is difficult to determine whether this is a cyclical recession or a structural weaken-ing of the industry and it is thus difficult to make predictions for 2020. It could be a year of great volatility if the political and economic uncertainties characterizing 2019 are not resolved.

In any case, we must not forget that this slowdown - whose first signs were perceptible with the 2018 year-end results - comes after a long period of growth: seven years, to be exact, with the sole exception of 2013.