Hellweg Maschinenbau GmbH & Co. KG, a specialist granulator manufacturer from Roetgen in the Eifel region of Germany, is among the nominees for the Plastics Recycling Award Europe which recognizes products that boost sustainability. The new digital GRANUmaster Smart Control is one of six finalists in the "Recycling Machinery Innovation of the Year" category. The award is sponsored by Plastics Recyclers Europe and Crain Communications, the organizers of the Plastics Recycling Show Europe (PRSE) in Amsterdam, where the victors will be chosen on 26 March 2020. 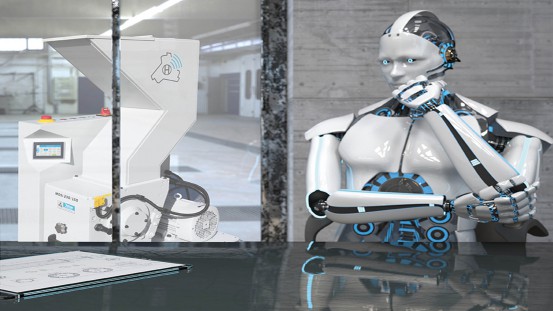 Hellweg met with an enthusiastic industry response when it presented its new digital Smart Control System for granulators. And now the system has been nominated for a PRS Innovation Award. © Hellweg Maschinenbau GmbH & Co. KG

The GRANUmaster Smart Control, given its public debut at K 2019 by Hellweg Maschinenbau, is a digitalization first for granulators, making Hellweg the first granulator manufacturer to offer connected functionality and electronic monitoring for such machines. Smart Control measures and stores relevant parameters, such as power consumption or the service lives of bearings, blades, screens and V-belts, so enabling application-specific optimization of energy efficiency and contributing to sustainable production.

Technical refinements such as a motor soft start as standard and a new motor brake enhance the granulators' power saving characteristics and safety. The new 'eco' operating mode, which cuts power consumption by adapting rotational speed to the instantaneous input volume, ensures even greater energy savings.

Smart Control had already caused quite an industry sensation at K 2019. "We were really overwhelmed", recalls Mark Hellweg, managing director and owner, who is delighted with the large number of orders. In late January this year, Hellweg also exhibited the system at Interplastica in Moscow and met with great success there as well. At PRSE, which will take place in Amsterdam on March 25 and 26, 2020, Hellweg will present the GRANUmaster Smart Control at booth B24.