Clariant Masterbatches has developed a novel chrome color that opens new opportunities for designers and manufacturers of high-end products, bottles and packaging. 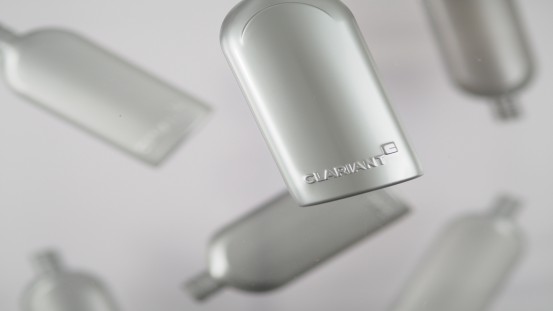 Targeted especially at polyethylene terephthalate (PET) containers, the color is slightly translucent, so it is ideal for applications where it is necessary or desirable for the contents in the bottle to be visible. Yet it has the power to overcome slightly off-color resins, including post-consumer recycled (PCR) PET. In fact, the effect was first demonstrated on bottles made of recycled PET resin.

The team at Clariant ColorWorks™ design and technology centers developed the new color masterbatches in response to growing interest, particularly in the technology sector, for truly metallic looks. Designers recently began focusing on silver and chrome with a liquid feel, explains Judith van Vliet, ColorWorks Senior Designer and a recognized color expert. “You see it a lot in glass and that kind of transparency is also very trendy. Clariant’s new chrome masterbatch develops a look that is the closest I’ve seen to a true metallized effect. It does a very good job of bringing those bright qualities to plastics for use in bottles containing prestige products.”

The secret to achieving the brilliant chrome effect lies in the pigment particle-size distribution and the way it is incorporated into the masterbatch. Reflectivity is dramatically increased compared to more conventional silver or chrome colors.

The chrome effect has other benefits as well, including the way it reacts to laser radiation. Unlike other colors, which turn grey or black under laser radiation and leave a physical, palpable mark on the surface, the chrome pigment simply disappears leaving only the natural transparent polymer behind. “You can create very subtle, elegant markings,” reports Stephanie Dycha, Manager of the ColorWorks center in West Chicago, Illinois. “You get a three-dimensional look, even on very thin sections like those that are typical of injection-stretch blow molded PET.”

The new Clariant liquid-look chrome masterbatch is the first product to arise from NewAesthetix, a new ColorWorks initiative aimed at developing unique color and effect options that deliver aesthetic qualities not normally expected in plastic materials.

“If there is one place that has a mission to try new things, it is ColorWorks,” says Dycha. “That’s because ColorWorks is global – we’re not in just one country or location -- and we’re not just focused on a specific market segment. In fact, we experiment with almost any kind of pigments or effects, even those that may have not been developed originally for application in thermoplastic materials.”