Hitting the modern-day nail on the head

With the aim of presenting its products and solutions, Vecoplan AG invited international experts to its 360-Degree Days from May 27 to 29 in its modern Technology Centre in Bad Marienberg – however, the event was of course virtual due to coronavirus restrictions. 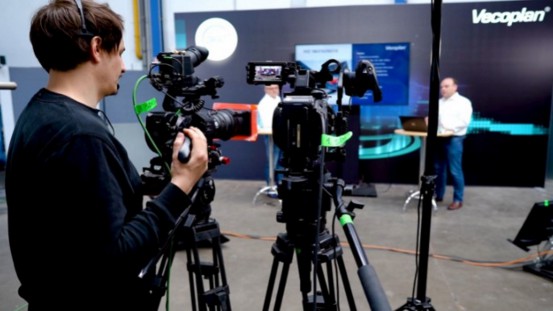 “It was very different from a normal presentation because you can’t see the audience’s reactions,” says Cathrine Rekett, Head of Application Technology Recycling | Waste at Vecoplan, describing the work in front of the camera. She adds with a wink, “You don’t know if anyone is even watching!” They were indeed watching, Cathrine! The three-day 360-Degree Days event with exclusive live demonstrations was very well received by an audience numbering nearly 400 participants. They watched the German and English language presentations hosted by Vecoplan experts and covering topics such as sustainable waste treatment, refuse-derived fuel handling, plastics recycling and modern shredding solutions.

In keeping with the style, the 360-Degree Days didn’t end with a bang, but with the sound of a Vecoplan infinity shredder: it was a live shredding demonstration, during which the company demonstrated what efficient shredding actually looks like in practice. Despite a short but extremely intensive preparation time, the event was a great success and “a mega team effort”, as Rekett emphasises.

Due to the cancelled trade fairs this year, Vecoplan had the idea of publishing its new products presentation live on the Internet – and an all-round successful event was created thanks to a coherent concept, comprehensive advertising measures and direct customer contact. “The great response shows that we really hit the modern-day nail on the head, so we’ll be sticking with this concept and expanding it,” says Martina Schmidt, Head of the Recycling I Waste division.