COBRA International, one of the world’s largest OEM manufacturers of composite goods for Water Sports, Automotive, Marine and Civil Engineering, is pleased to confirm the shipment of its first 36 composite canoes to ARE Tahiti. 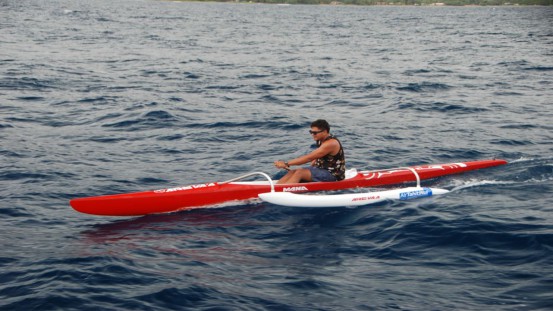 COBRA has collaborated with leading outrigger canoe brand ARE Tahiti to mass produce its new OC-1 canoe, ‘Mana’. Designed by former professional windsurfer Baptiste Gossein  (JP Australia and Neil Pryde), ‘Mana’ features a closed deck on which the paddler sits on top of the hull. Available in two models; a hybrid version weighing 12kg, using an 80:20 mix of E-glass and carbon fibre reinforcement fabrics, and the PRO model – a weight optimized, ultra-light, full carbon version that weighs as little as 9kg.

“We required the best in composite construction for both models, a stunning final finish and a build rate that could keep up with our growing order book”, comments Baptiste Gossein.

As with all of COBRA’s watersports’ projects, a perfect master model formed the basis of the mass production tooling and two sets of composite hull tooling were taken from the master plug allowing a build rate of up to 50 OC-1 canoes per month.

For the lay-up and construction process, COBRA’s high-performance PVC foam sandwich windsurf board construction provided a solid starting point.  Having selected vacuum consolidated epoxy wet layup for the mix of woven and stitched biaxial reinforcements, COBRA was able to build down to the customer’s weight target with the absolute minimum of waste and additional consumables.  Top and bottom sections of the hull were moulded separately then bonded together, with the smaller outrigger hull – known as the ‘ama’ – produced in the same way.  Prepreg carbon fibre and in-house split mould tooling was also used for the two ‘Iakos’ - the two cross beams that join the ama to the main hull.

An in-mould applied finish coat was then used for the hybrid OC-1 while the PRO carbon fibre model benefits from COBRA’s ultra-light paint system.

“COBRA is able to provide mass production capability and rapid new model turnaround, as well as delivering consistently high quality. We are delighted with the first COBRA built OC-1s and have received exceptionally positive feedback from both customers and racers” comments Baptiste Gossein.

The next ARE project to enter mass production at COBRA will be the V-1 canoe. Similar to the OC-1 but an open boat that the paddler sits inside, the V-1 will have no rudder or steering system, requiring more finesse to manage underway.

“The OC-1 outrigger canoe is a superb example of our customer focused approach to production process development.  By working closely with Baptiste and the ARE team, COBRA is able to provide mass production capability and a rapid new model turnaround, as well as delivering consistently high quality.  This is a sector in which we expect to see significant expansion over the next few years”, comments Danu Chotikapanich, CEO, COBRA International.