Once again, “arburgXvision” had a fascinating topic lined up for its viewers: “Mould Strategies 2.0”. In the ninth episode, Arburg experts Christoph Blöchle and Christian Homp presented strategies for significantly increasing the utilisation rate of injection moulding machines. In addition to the expert presentations, there were instructive live links hosted by Philipp Jarosch in Arburg’s Training Center. Around 450 people watched the interactive internet TV programme live on 28 October 2021. Anyone registered with “arburgXvision” can watch this and all previous episodes in the Media Centre. 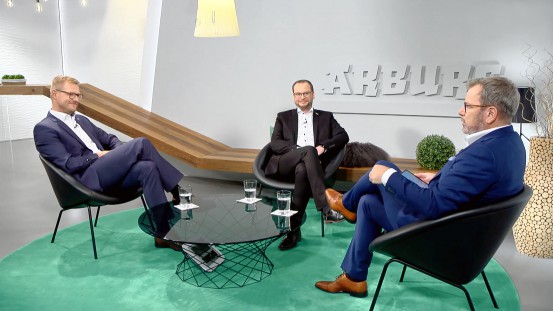 In what was once again a very entertaining two hours, the experts competently shared valuable ideas and inspiration and interacted live with viewers to answer key questions. The main topics in theory and practice were strategies for protecting, preparing and monitoring injection moulds as well as tips for combating wear.

Interaction of machine, mould and controller

Christoph Blöchle, Technical Sales Manager at Arburg, argued that “each mould is only as good as the machine that it runs on”, adding that the aim was to produce high-quality mass-produced parts with an optimal price/performance ratio. This requires a low machine load, little wear on the mould, and fault-free operation. “In other words, ‘Mould Strategy 2.0’ means the perfect interaction of machine, mould and controller," Christoph Blöchle underlined in his technical presentation. Machine technology plays a major role when it comes to symmetrical force application, platen parallelism and force distribution on the tie bars, for example. Key tips from an expert on protecting your mould: If there are process variations, the machine alignment should be checked first and the toggle-type clamping units adapted to different mould installation heights to ensure constant clamping force.

“The best mould strategy is actually really simple: increase reliability and reduce wear,” declared Christian Homp, Team Manager Applications. He went on to stress how important it was to find the perfect compromise between controllable technology and a high utilisation rate. “This starts with the selection of the right material, but also covers the issue of the use of hot runners and ejectors, considerations on flow path wall thickness ratios, and the selection of the right injection unit, drive technology and peripheral equipment,” said Christian Homp. As a supporting tool, he presented the “MachineFinder”, which can be used to determine the optimum machine technology for the requirements of the part and mould. He also explained how assistants such as the “aXw Control ScrewPilot” and “aXw Control ReferencePilot” provide support in a way that is easy on the mould. In addition, Homp talked about how various monitoring functions can be used to prevent damage to the mould during ongoing processes and how maintenance points can be programmed depending on the cycle.

Philipp Jarosch, Team Manager of the injection moulding facility, used two Allrounders in Arburg’s Training Center to demonstrate which mistakes to avoid when preparing machines and moulds and the various monitoring options available. He first showed how problems closing moulds can be solved by levelling the machine correctly instead of increasing the clamping force and hence wear. During the second live link, the injection moulding expert demonstrated how mould breathing could be monitored, for example, using a compression path sensor. He also explained how wear can be detected and how forces can be monitored and maintenance points set using the Gestica controller.

Mould and machine will communicate with each other

With moderator Guido Marschall, the experts reiterated how important it is to take a holistic view of the manufacture of a new product and to involve application technology advice at an early stage. “A well-designed mould strategy helps to protect your investment, reduce production costs, and increase part quality,” Christoph Blöchle emphasised. The direction in which Arburg is heading in terms of mould strategy was formulated by Christian Homp as follows: “In future, the mould will communicate directly with the machine controller and facilitate production. At Fakuma 2021, we and one of our mould partners demonstrated for the first time how this can be done.”

To join the event and stay up to date, simply complete a one-off registration at www.arburgXvision.com. This provides free access to all previous events and to the Media Centre for this outstanding series of programmes.