On 18 November 2021, Arburg hosted an ALS User Meeting again. The in-person event met with a very positive response. A total of around 60 participants came to Lossburg to find out about new features and receive valuable tips and suggestions. One highlight was a presentation by medical technology company Röchling Medical, which was able to hugely increase production efficiency with the help of ALS. 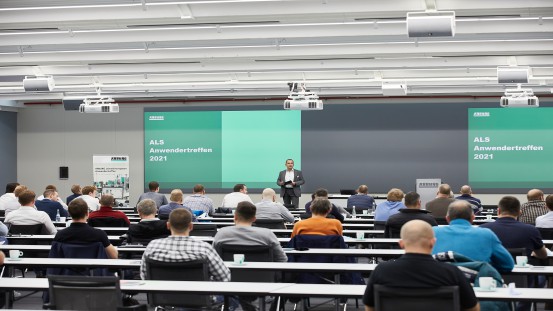 User Meeting: Around 60 ALS customers took the opportunity to learn about new features and developments for the host computer system from Arburg’s experts in Lossburg.

“The overwhelming interest far exceeded our expectations and reflects the enormous innovation push that our industry is experiencing,” said Axel Kinting, ALS expert and Head of the new Digital Industrial Solutions division at Arburg. “At the User Meeting, our customers have the opportunity to exchange ideas and information intensively – and we get valuable suggestions that we can use to further develop ALS in a very targeted and needs-oriented manner.”

Peter Kowalewski, Team Manager Digital Industrial Solutions Support, first presented numerous innovations of ALS up to the current version. Among these is the conversion of the server modules to 64 bit, meaning practically unlimited storage capacity. In addition to many detailed improvements, another important feature is the capacity to anonymise personal data and “digital fingerprints” of former employees in compliance with the GDPR.

Getting started with paperless production and Smart Factory

ALS expert Patrick Wahl demonstrated the advantages of paperless production live on a cup-producing Allrounder 370 A and used a tablet to provide insights into the machine terminal with mobile ALS modules. These can be used to view the process status and production progress, for example, and to visualise current indicators regarding OEE (overall equipment effectiveness) and quality. Additional resources can be added easily, jobs can be loaded directly onto the machine without typing, maintenance can be carried out paperlessly and hidden capacities can be revealed. This saves an enormous amount of time, creates transparency, and reduces paper consumption by several thousand kilograms per year when extrapolated to the companies participating in the User Meeting.

ALS team colleague Markus Widmaier gave valuable tips and advice on all aspects of the Smart Factory and transparent production. These included the integration of non-injection moulding machines via the OPC UA communication protocol and new machine widgets for the ALS info terminal, which is now also available as a licence model on a coin basis.

One user that is already putting many of the points mentioned into practice is Röchling Medical from Waldachtal. Daniel Tobien, Head of Production, explained in his fascinating presentation how the medical technology company has hugely increased productivity and patient safety. Since 2018, a total of 14 assembly machines and lines and 1,400 active moulds have been connected to ALS, in addition to around 65 injection moulding machines, 43 of which are in the clean room. “As a result, we have increased part quality, improved sequences, and can optimally document and analyse our processes,” stated Daniel Tobien. “OEE is now the indicator that shows us how well or badly production is running. After introducing ALS, we have already increased OEE from 40 to 67 per cent and want to improve even further.” Especially in the clean room, paperless production is a clear advantage. Röchling Medical says that it is also planning to integrate all peripheral devices into ALS in future and to additionally visualise the energy costs for the injection moulding machines.

Finally, Arburg experts Frank Hammann, Timo Weisser, Markus Friese and Christoph Klein provided an overview of the integration of ALS into the arburgXworld customer portal and new software developments. According to the experts, ALS version 7.5 with new features will be available in the first quarter of 2022. They also reported that work is being done on a new interface technology called “REST API”, which will enable other systems to communicate with ALS in future using a standardised protocol. The new “ALS Track & Trace” module for tracing parts in the production process and the expansion of the machine terminal with new functionalities were also presented.