The dozen is full! arburgXvision programme on plastics and recycling

Exciting, informative, a little surprising: that's how the 12th arburgXvision broadcast can be described in a nutshell. On 19 May 2022, Peter Barlog, Managing Partner of Barlog Plastics GmbH, Gerhard Böhm, Arburg Managing Director Sales and Service, and Dr.-Ing. Philipp Kloke, Application and Process Development at Arburg, discussed the topic of "Plastic as an innovation driver - new materials and what they bring!" In this context, there was also a lot of talk about recycling, sustainability and energy issues. But because everything is connected to everything else, these topics are so closely linked that it is difficult to separate them. 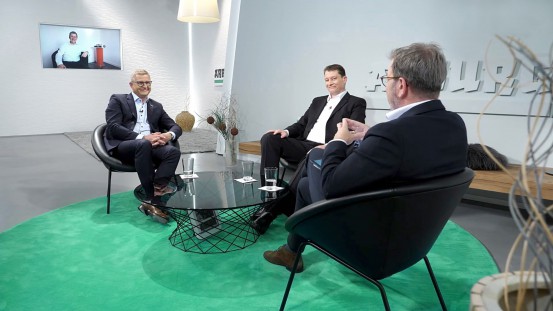 On social media more than 1,000 viewers followed the live German-language broadcast, which could be accessed in the media library shortly after it was broadcast. In the follow-up (as of 23 May 2022), around 1,600 interested people took the opportunity to watch the programme on catch-up on the event website or on various social media channels. The figures together with the exciting viewer questions prove that this arburgXvision broadcast was once again about a key topic that moves the plastics world.

How to handle new materials?

It is indisputable that a world without plastics is no longer conceivable. However, and all participants agreed on this, there is still a lot to be done in order to use plastics more sensibly and economically in the future. Gerhard Böhm put it in a nutshell: "Plastics just don't rot." His approach is that plastics should only be able to do as much as they have to do for the product in question. Dr.-Ing. Philipp Kloke added that plastics should be used specifically where they are really needed.

In focus: recycled materials and energy

And there we were with the topic that is gaining more and more importance and has meanwhile, according to the conviction of the discussants, reached politics, society and industry.

A live survey during the programme showed that 32 per cent of the operations use recycled materials, 40 per cent use regrind and 10 per cent use bioplastics. In the meantime, says Peter Barlog, the demand for recyclates far exceeds the supply. The reason for this is of course also the current political and economic situation. The increasingly scarce raw materials coupled with rising raw material and energy prices would make recycling attractive at the moment. So the crisis as an opportunity? Only to a certain extent. Because post consumer material still costs almost twice as much as virgin material. And hardly anyone pays for that.

Manuel Wöhrle, Team Manager Industries, impressively explained how new processes can be used to produce in an economical and sustainable manner when he visited the Arburg headquarters in Lossburg. He presented the FDC process (fibre direct compounding), in which fibres are individually cut to size and fed directly into the melt. This would not only reduce CO2 emissions and logistics costs, the components would also be up to 30 per cent lighter and, depending on the application, material costs could be cut by 40 to 60 per cent.

A lot going on in the live chat

The topic and discussion must have struck a chord with the audience. "All hell has broken loose in the chat," moderator Guido Marschall noted enthusiastically, passing on questions to the guests.

The participants were primarily concerned with supply and cost issues. When it comes to supply chains, Peter Barlog says, each company has to ask itself what the best solution is. Dr.-Ing. Philipp Kloke brought the regional and thus also cheaper aspect into play: "Think regionally when collecting and recycling". A digital product passport could help here. However, many questions are still unresolved. Also the question of what to do with plastics that are not recyclable. "Under no circumstances should they be dumped into the sea or rivers, and they should not be buried," Gerhard Böhm stated clearly. It has become clear that there are no simple answers to recycling, and certainly no blanket answers. "Of course," says Peter Barlog, "it would be ideal if you could turn every PET bottle into a PET bottle again. We have a long way to go before we get there.

Sustainability not only for high earners

For a real change, patience, political support and the willingness of consumers are needed. But, with all the costs that are still high at present: "Sustainability must not be a privilege for high earners," Peter Barlog warned. There is acceptance in society for more recycling and the industry is also more prepared than ever before. Nevertheless, it remains a huge task.

Outlook and a surprising announcement

At the end of the entertaining 60 minutes, Gerhard Böhm gave a brief preview of the Arburg Technology Days in Lossburg from 22 to 25 June 2022, where sustainability, resource conservation and also digitalisation will be central themes. Finally, Peter Barlog provided an "aha" experience in the studio round with a real surprise. Federal Minister of Economics Robert Habeck (Greens) has already announced his attendance at K 2022 in Düsseldorf (19-26 October). He is said to be the first high-ranking and well-known German politician to visit the largest plastics trade fair.

The next programme is sure to come

Guido Marschall will be back on air with illustrious guests barely four weeks before K 2022. The exact date is 22 September 2022. For those who have not yet seen the previous programmes, they are available at any time in the media library of the website "www.arburgxvision.com abrufbar. It will be well worthwhile!