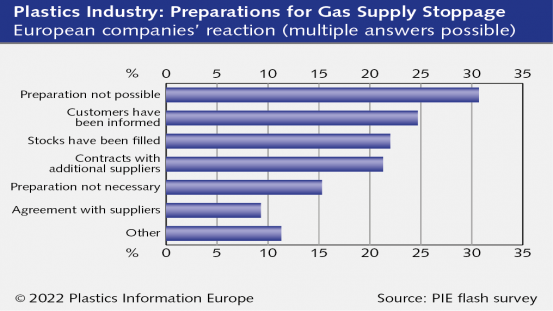 A large part of the European industry is heavily dependent on Russian energy supplies – and its consequence have tragically been demonstrated every day since the start of the war in Ukraine. Governments of almost all European countries have been working overtime to find new suppliers for oil and gas, and to accelerate the development of alternative energy sources. Good for the environment, bad for Putin? Unfortunately, the formula is not that simple.

An EU-wide oil embargo against Russia has so far failed due to Hungary’s blockage. Leading business associations across Europe are fiercely opposing a possible gas embargo.

And the European plastics industry? How much pressure are the companies along the plastics value chain under, how well-prepared are they for a possible stoppage of gas deliveries?

PIE’s Flash Survey shows that just over half of the companies surveyed fear the halt of natural gas supplies from Russia. A good quarter are not afraid of the same, and about 12% of the companies go a step further and say the possibility of an embargo does not concern them. German-speaking Europe and France, however, are – unsurprisingly – much more concerned, as the gas cut-off would hit a vast majority of companies hard. In contrast, plastics companies in South-Eastern Europe seem to be more relaxed: 60% of the respondents from these countries say they do not fear the stoppage of supply or that it would not affect their business.

Is the industry ready?

So, is the European plastics industry well prepared for an emergency situation? About one third of the managers do not believe preparations for such a scenario are even possible – on the other hand, 15% do not think preparations are necessary. In Italy, the UK and Ireland, companies are more sceptical: around half of the survey participants say no preparations at all can be made for a possible gas stoppage.

“We rely on our governments’ efforts to secure other energy sources.” - quote from a resins maker

The situation continues to be diverse: a good 20% of the respondents each report that customers have been informed about possible supply interruptions, that stocks have been replenished as a precautionary measure or that supply contracts have been signed with other suppliers as a precautionary measure. A recycler from Norway is pleased about the fact that the country “is an oil and gas producer”. Another recycler says, “Use waste plastics instead”.

If there is a supply stoppage of/embargo on Russian gas, how would the European industry be affected? About 65%, and thus the clear majority, fear higher polymer prices and – obviously – higher energy prices. In German-speaking Europe, the Nordic region, and Spain & Portugal, the expectations are even worse: more than 80% of the respondents expect higher resin prices. In these countries, therefore, an above-average number of companies intend to raise their product prices in the event of a gas freeze.

A positive sign could be that 86% of all respondents in Europe expect to be able to continue to fulfil their supply contracts even in the event of a gas cut-off, and 87% say they could keep their production going even without Russian gas – of course at the expense of margins and with considerably worse prospects in chemicals and in processing.