Now it is official: with its trainee project "Smart Bratwurst", Arburg was one of the five winners of the "Industry 4.0 Talents" competition this year. The award was presented to the trainees Nico Schoch and Nils Frey by Dr Patrick Rapp, State Secretary in the Ministry of Economics, Labour and Tourism of the State of Baden-Württemberg, at a virtual awards ceremony. The two trainees travelled to Stuttgart on behalf of the Arburg team to receive the award and present the project in the Haus der Wirtschaft. 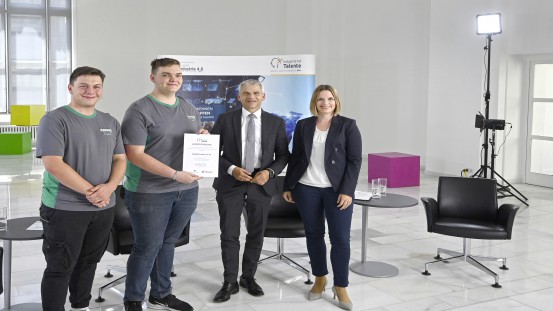 Arburg trainees Nils Frey (2nd from left) and Nico Schoch (left) proudly present the winner's certificate. This was handed over by Dr. Patrick Rapp (2nd from right), State Secretary in the Ministry of Economics, Labour and Tourism of the State of Baden-Württemberg, in the presence of Jana Eiser-Mauthner, Project Manager, Alliance Industry 4.0 Baden-Württemberg.

Nico Schoch and Nils Frey are trainee electronics technicians in automation technology and were both involved in the further development of the outstanding automation for the "Smart Bratwurst". During the award ceremony, they presented their project to Dr. Patrick Rapp. The State Secretary was impressed by the unconventional idea and its execution and had the trainees explain the challenges involved in developing the smart grilling station. Partly as a result of these interesting insights, he subsequently announced his visit to Arburg in Lossburg.

The trainee project on the topic of Industry 4.0, with which the Arburg team entered the race, has already been in use time and again since 2016 at the Arburg Technology Days in Lossburg, the annual in-house event with thousands of visitors from all over the world, and is causing a sensation. It is further expanded and technically refined by each new cohort of trainees. The interdisciplinary trainee team consists of trainee electronics technicians, mechatronics engineers, industrial mechanics, and IT specialists, as well as industrial clerks and DHBW students in mechanical engineering and mechatronics.

Basically, it is a grilling station based entirely on Arburg technology that automatically sears sausages in a continuous process. An interplay of components: a Thermolift dryer heats the pre-cooked sausages to the right temperature. After they are inserted into a special holder, the sausages are then grilled to perfection in an original Allrounder cylinder module. The subsequent handling – preparing the paper plate, putting on the sausage, portioning the mustard, and retracting the sausage holder – is carried out by two Multilift robotic systems. The control cabinet for the control system (PLC) of the grilling station, as well as the entire mechanics, and even the installation and wiring of the safety fence, were realised by the trainees themselves.

This award is proof of Arburg's commitment when it comes to Industry 4.0 and digitalisation. It moves the company into focus as a modern training organisation for the increasingly sought-after talents in mechanical engineering.