It is undisputedly the world's leading trade fair for additive manufacturing technology and 3D printing: Formnext in the banking metropolis of Frankfurt a. M., Germany. From 15 to 18 November 2022 it will open its doors again. Arburg will be exhibiting the new Freeformer 750-3X in Hall 12.1 at Stand D61. Its build chamber is around 2.5 times larger than that of the Freeformer 300-3X, which will also be presented at Formnext. There will be a limited sales promotion with the Freeformer 200-3X "soft", which features special equipment for processing soft materials and an attractive price. On top of that, the new innovatiQ TiQ2 printer can also be admired live on one of the largest stands at the trade fair. 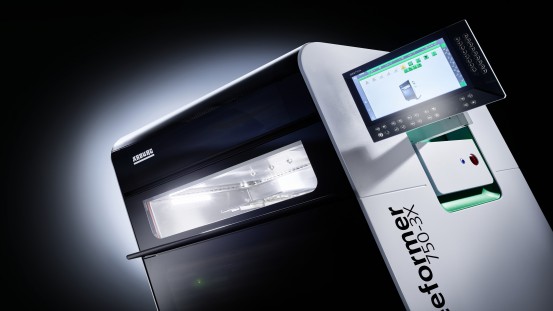 "As the world's leading trade fair, Formnext is one of the most important trade fairs of all for us and our markets," explains Dr. Victor Roman, Managing Director of ARBURGadditive. "That is why we will be there with a fittingly extensive presence." The new Freeformer 750-3X, whose large build chamber is particularly suitable for the rapid series production of large components or several articles per construction order, will certainly be a highlight for international professionals. "Other fair highlights include a sales campaign with our Freeformer 200-3X 'soft' for processing soft materials, high-temperature applications, and additive manufacturing of hard-soft products on one of a total of three Freeformers 300-3X," says Dr. Victor Roman.

The principle of material preparation remains the same in the Freeformer 750-3X, but the entire system – preparation and discharge units – has been optimised so that the new unit could be designed more compactly. From a strictly external point of view, the Freeformer 750-3X cannot be distinguished from the 300-3X, as it has the same external dimensions. However, the part carrier is around 2.5 times larger at around 750 square centimetres – which is also what the name of the new system refers to. The significantly enlarged build chamber measuring 330 millimetres x 230 millimetres x 230 millimetres, in which, incidentally, the temperatures are kept stable without any special air flow or circulation, is the result of several technical innovations. These include optimised melt pressure generators for dosing and injecting, which use servo motors from AMKmotion, a company in the Arburg family. This allows the three discharge units to be positioned more closely to each other and in a more compact way. Due to advanced software features of the control system, it was possible to increase the printing speed considerably. For example, process-optimised latticed support structures can be created where the build time is up to 55 per cent faster than with "conventionally" constructed ones.

The Freeformer 200-3X "soft" is particularly suitable for processing soft materials such as TPE in a wide range of shore hardnesses. Material drying, which is necessary when processing soft materials, is integrated into the machine and programmable via the control system. Due to its gentle plasticising, the Freeformer 200-3X "soft" can also be used to produce components with a high degree of mechanical strength. The attractive price makes an economical entry into the world of additive manufacturing possible. From Formnext onwards, Arburg will be launching a limited promotion that makes it worthwhile for customers to order quickly.

Also represented at the Formnext stand is Arburg family member innovatiQ. Its systems process FFF (Fused Filament Fabrication) filaments or LSR (Liquid Silicone Rubber) by innovatiQ's own developed and patented process. The new TiQ2 filament printer for industrial applications will be presented. Dr. Victor Roman is certain: "With four Freeformers and the 3D printers from innovatiQ, we are showing exactly what our customers expect from us: solutions for special additive manufacturing tasks."