arburgXvision: Into the digital future with teamwork

It's a topic that no company can avoid: Digitalisation! What can it do, what does it offer, what risks does it conceal? The experts on the arburgXvision programme on 24 November 2022 Stephan Reich, Arburg Divisional Manager IT Digital Solutions, Peter Kowalewski, Arburg Team Manager Industrial Solutions Support, and Thomas Pöggel, Telekom Business Development Manager 5G Business Customers, were unanimous in their opinion that digitalisation is the future that offers more opportunities than risks. Matthias Schneider, Managing Director Digital Services & IT at Fischerwerke, one of the market leaders in fastening systems, took the same view. He presented their digital journey and the company's experiences with the Arburg host computer system in a video short. 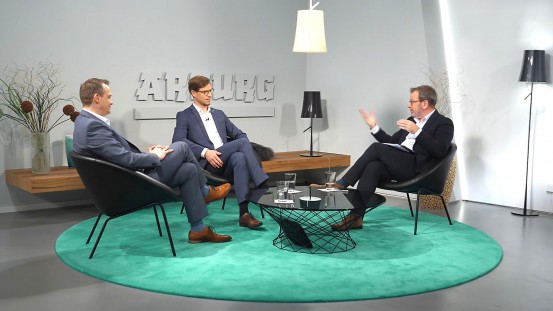 Attracting around 3,600 viewers (as of 29 November 2022), the arburgXvision programme on the topic of "Digital services – opportunities and risks of digitalisation" was the most successful of the year. This figure proves that the topic is on the minds of those in the industry.

As Stephan Reich noted: "No one can afford not to invest in this sector. Digitalisation offers countless opportunities, including energy saving, for example, but this must be part of everyday practice." Peter Kowalewski added that "the important thing is to have the right strategy with the right partner." Thomas Pöggel from Deutsche Telekom said that it was not a matter of one or two years either and that a long-term plan was always needed. And he offered praise: "Arburg really stands out. The company is a flagship and ahead of many others. That's what makes it so interesting for us as a pilot customer for the 5G campus network."

A real-life example was provided in the video clip of Fischerwerke, the world-renowned anchor manufacturer based in the Black Forest. For Matthias Schneider, Managing Director Digital Services & IT, digitalisation has had a real boosting effect, with the involvement and participation of employees a crucial factor: "Many things have changed for them. New procedures in the workplace, training. But they have accepted it and are thinking about what we can optimise further and how best to do this." The producer of 14 million dowels a day uses the Arburg host computer system (ALS) because it is the best, as confirmed by Schneider: "When it comes to injection moulding, no system is stronger. ALS is helping us to optimise production in many areas." The goal at Fischerwerke is to interlink all their machines worldwide in order to achieve even more efficiency in production processes.

A live survey among the audience revealed that digitalisation is part of everyday practice for only 28 per cent of the companies. The rest, at least, see it as an opportunity for the future. What concerns everyone is the issue of data security. Thomas Pöggel reassured people by saying that Deutsche Telekom had adapted its modular system considerably in the past few years and sees that the cloud is trusted the most. Peter Kowalewski also gave an assurance that the data would of course always remain with customers when they used ALS. Arburg offers a three-phase model for this: data remains on the machine, with customers in their networks, and in Arburg's arburgXworld customer portal. Security is also comprehensively guaranteed for the increasingly popular 5G campus networks, according to Thomas Pöggel the "digitalisation turbo for the production of tomorrow".

Optimistic look into the future

Peter Kowalewski is certain that the topic of digitalisation has arrived in the plastics industry. Companies want to

do something because they've realised that a lot can be achieved with relatively little effort. For the coming years,

the expert panel expects a lot to happen in terms of standardisation in the interfaces. Digitalisation will be used to try to counteract the shortage of skilled workers, for example. The "remote expert" will soon be standard. Operations will become easier, assistance systems, cross-linking and automation will advance. But all this is probably linked to the fact that there will be fewer staff.

Programme available in the media library

Sometimes, however, life writes the most incredible stories. Of all the topics, some viewers of the 14th arburgXvision programme on "Digital services – opportunities and risks of digitalisation" experienced transmission difficulties at the beginning. But in the end the problem was masterfully solved, with the content of the beginning of the programme simply added at the end. Consequently, around 900 viewers followed the live programme on social media. However, it could be accessed in the media library shortly after being broadcast. In the follow-up (as of 29 November 2022), more than 2,600 people took the opportunity to watch the programme on catch-up on the event website or on Arburg's various social media channels. All 14 arburgXvision programmes can be found in the media library (www.arburgxvision.com/mediathek). It's worth taking a look!