The Sinzig-based machinery builder FEDDEM GmbH & Co. KG invited to Niederzissen, Rhineland-Palatinate, on 27 and 28 September 2022. At the production site of its sister company AKRO-PLASTIC GmbH, the participants were given an insight into the production technology involving the machinery builder’s equipment in addition to several interesting lectures. 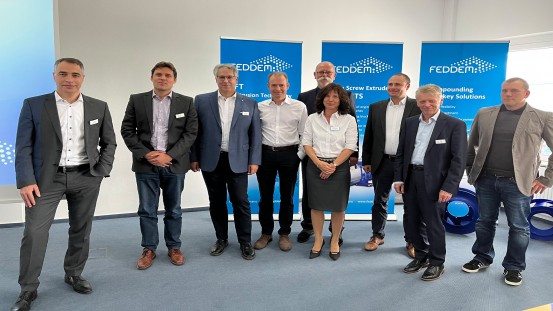 Dieter Groß, Managing Director of FEDDEM GmbH & Co. KG opened the meeting on 27.9. with a short company presentation. He also referred to the IFO business climate index, the VDMA business figures and expectations for 2023, which are influenced by the current global political situation and are correspondingly more restrained than last year.

Dr. Thieß Petersen, Senior Advisor of the Bertelsmann Foundation, gave the keynote address. He took the audience on a retrospective, an outlook and an overview of the various facets and economic effects of the three big "Ds": Digitalisation, Demographics, and Decarbonisation.

Then it was time to go into the depths of technology. Sebastian Jost, Head of Engineering and Design at FEDDEM, explained the basics of ICX® technology before presenting the latest technology of an FEDDEM LFT plant in detail. Dr. Oliver Neuß, Managing Director of AKRO-PLASTIC GmbH, then went into the challenges of recipe development for short and long fibre-reinforced plastics. Horst Heckel, Project Manager Plastics Production at Ziehl-Abegg SE, then turned to the next step in the process chain, the production of complex large components made from LFT materials.

The first day ended with a short visit to the AKRO Competence Center. Here, the conference participants received a short introduction into the different processing technologies of AKRO-PLASTIC and received a small, laser-personalised and "real" 3D printed demo object as a practical sample in connection with the theoretical lectures of the day.

In the evening, the participants met for networking in the beautiful surroundings of the eastern Volcanic Eifel near Lake Laach at the Seehotel in the Benedictine Abbey.

Afterwards, in the programme part "ICX® system components", the thread from the previous day was taken up again and the necessary peripheral systems, which together with the extruder form the framework of the ICX® technology, were presented. Thomas Stegmeier, Head of Sales at AZO GmbH, started with insights on product feed and discharge, followed by dosing technology, described by Frederik Hanß, Industry Sales Manager at Schenck Process Europe GmbH, and concluded with pelletising technology, explained by Harald Zang, General Manager Sales at Maag Germany GmbH, whose components make a significant contribution to ICX® technology.

Afterwards, Dr Gabriele Wolff, owner of Coaching Wolff described the second "D" under the title "Demography: The scarce human resource" the challenges that companies currently have to face in managing their human resource developments. And then it was on to the third "D", Decarbonisation. Björn Vortisch, Chairman of the Advisory Board and shareholder of Enexion GmbH, described with clear charts and examples the burning issue of energy supply to the industry and which changes in working methods are necessary to safeguard it.

The conference was thus thematically complete and the 3 "D's" had been illuminated in detail. In the end, all that remained was to put the conference's namesake, the ICX® technology, in perspective! For this purpose, all participants were invited to visit two LFT compounding lines in production, which represented the hardware side of this technology, and to have their questions answered by the technical staff of FEDDEM on the machine side and AKRO-PLASTIC on the production side.

Due to the positive response to this new event concept, FEDDEM plans to repeat this format at regular intervals.