The shipments value of primary plastics machinery (injection molding and extrusion) shipments in North America decreased marginally in the third quarter according to the statistics compiled and reported by the Plastics Industry Association’s (PLASTICS) Committee on Equipment Statistics (CES). 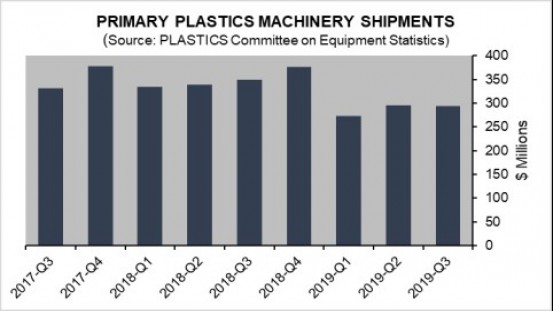 “The plastics industry is a mature industry and its growth will continue to track gross domestic product (GDP),” said Perc Pineda, PhD, chief economist of PLASTICS. “The third quarter numbers moving sideways are in sync with weaker manufacturing activity in the economy this year. In Plastics Quarterly, our GDP growth forecast for the second and third quarters were 2.0% and 1.9%, respectively and that’s what we got. The machinery shipment numbers were in sync with weaker manufacturing activity against the backdrop of an economy that moved sideways.”

The CES also conducts a quarterly survey of plastics machinery suppliers that asks about present market conditions and expectations for the future. In the coming quarter, 39% of respondents expect conditions to either improve or hold steady—lower than the 56% that felt similarly in the previous quarter. As for the next 12 months, 63% expect market conditions to be steady-to-better, up from 53% in the previous quarter’s survey.

“The challenges and concerns of the business sector of the economy today, and plastics industry is no exception, are largely driven first by external factors—weak global economic growth and ongoing trade disputes—feeding into the U.S. which is largely an open economy. It is safe to say, that it is unlikely that the ongoing trade disputes will be resolved this year,” Pineda added.

About PLASTICS Committee on Equipment Statistics (CES)
The PLASTICS Committee on Equipment Statistics (CES) collects monthly data from manufacturers of plastic injection molding, extrusion, blow molding, hot runners and auxiliary equipment. A confidential, third-party fiduciary, Vault Consulting, LLC, compiles the monthly data and analyzes individual company data for consistency and accuracy. Once this crucial process is completed, Vault aggregates and disseminates reports to participating companies. If this is something you and your company are interested in please contact Katie Hanczaryk at khanczaryk@plasticsindustry.org or 202-974-5296.

About Plastics Industry Association
The Plastics Industry Association (PLASTICS), formerly SPI, is the only organization that supports the entire plastics supply chain, representing nearly one million workers in the $451 billion U.S. industry. Since 1937, PLASTICS has been working to make its members and the industry more globally competitive while advancing recycling and sustainability. To learn more about PLASTICS’ education initiatives, industry-leading insights and events, networking opportunities and policy advocacy, and North America’s largest plastics trade show, NPE: The Plastics Show, visit plasticsindustry.org. Connect with PLASTICS on Twitter, Facebook, LinkedIn and Instagram.