First-class natural mineral water and an exclusive bottle design are the trademarks of the Badoit spring. From the bottled water to the packaging the premium brand makes the highest demands of the quality of its products. KHS has supported the company, part of Danone, since 1986. With its new Innopack Kisters SP A-H shrink packer Badoit is again benefiting from the expertise of the Dortmund machine and systems manufacturer. The packaging machine produces shrink film processing quality as yet unrivaled on the market with practically crease-free and consistently stable results. 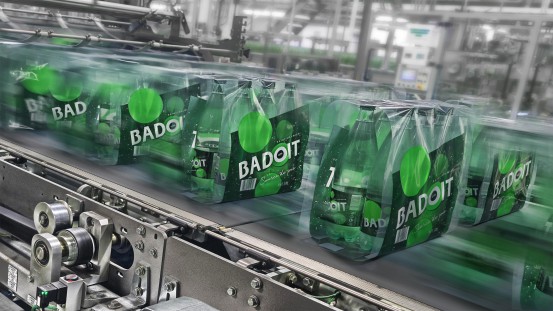 With its shrink packer Badoit can process films of a significantly reduced thickness. The machine also uses an optimum width of film per pack.

France is heralded as a paradise for gourmets. The land of haute cuisine is renowned the world over for its award-winning wines, outstanding cheeses and high-class natural mineral waters. One brand which has established itself as a leader among carbonated natural spring waters is Badoit. The bottler from Saint-Galmier in the Département de la Loire, southwest of Lyon, has been working closely with the country’s top restaurants for many years. In doing so Badoit has earned itself a reputation as a top brand of high-quality mineral water in the premium sector. “Our customers make the highest demands of our products – and not just regarding our water. The perfect quality of the packaging also plays a decisive role,” says Etienne Marie, plant manager at Badoit.

Not only on the home market is the design of primary and secondary packaging a marketing factor which determines the product’s success. “Beverage brands can clearly position themselves on the market through the nature of their presentation and design,” explains Christopher Stuhlmann, head of the Line Product Division at KHS.

This aspect is especially important for Badoit. “As a premium brand our products not only have to differ from those of the competition in quality but also in appearance. The exclusive standard of our water must also be reflected in the packaging,” states Marie. The mineral water plant has therefore opted for bottles with a long, elegant neck, a unique feature on the French market.

While the unusual bottle shape is a blessing when it comes to brand recognition, it has proved quite a challenge for the shrink packers used by the water bottler – also for its KHS Kisters packaging machines, some of which have been in operation for over 30 years. “The long-necked bottle makes it extremely difficult to produce a packaging quality which is outstanding in all respects,” Marie says. “The multipacks often had creases in the film, the print was distorted or the packs weren’t stable enough to withstand the logistics.” In addition, the outmoded packaging machines were no longer state of the industrial art when it came to efficiency and sustainability and were increasingly limited in their technological capacity. “We were no longer able or prepared to accept these compromises in packaging quality and machine efficiency,” claims Marie.

Badoit received support from its parent company. Danone Waters launched a competition between its individual brands and their production plants who then turned to their respective suppliers. “Danone Waters wanted a packaging machine which, thanks to significant further developments in the shrink tunnel segment in particular, considerably improves the standard of the shrink film processing available to date,” emphasizes Stuhlmann. Here, it was especially important that the lettering and brand logo on the packs was neither distorted nor creased.

Following intensive talks on the new specifications to be adhered to and the first promising tests KHS was ultimately awarded the contract for the project. “We have a close and trusting relationship with KHS. Its many years of expertise in the development of packaging systems and the strengths of its latest generation of machines had us convinced once again,” is how Marie describes the reason for choosing KHS.

The systems supplier now had to live up to these high expectations. Under the supervision of Christian Schilling, head of the shrink tunnel development group at KHS, the machine and systems manufacturer put together an experienced team of design engineering experts. They were in close contact with the engineers in Saint-Galmier. “Throughout the course of the entire project the teams worked together openly and absolutely professionally as partners – as usual,” Stuhlmann reports.

The expert team’s first task was to develop new components for Badoit’s packaging machines. The packaging specialists in Kleve subjected all system parts to thorough testing. After several optimization loops the improved components were integrated into the latest generation of the KHS shrink packer. “We then performed a series of further tests to make sure that our new developments satisfy Badoit’s high demands,” says Stuhlmann. Finally, the system passed its factory acceptance test and was shipped to Saint-Galmier.

Here, the KHS team replaced the old KHS Kisters shrink packer from 1986 with the optimized packaging machine. Following successful initial commissioning in December 2017 the packaging experts then focused on optimizing the system and its processes under real production conditions. “At first we weren’t able to fully achieve the required packaging quality with the combination of shrink film and machine used,” admits Stuhlmann. The specialists therefore spent the following months working on the various machine components, further developing, constructing, installing and testing them time and again.

One major further development on the new generation of machines was to distribute the hot air supply more accurately on both lanes. The optimum alignment of the hot air flow on both sides of the multipacks loosely wrapped in film also had top priority for KHS. “Both are crucial for crease-free pack quality as the optimum processing window for the partly inverse effects was extremely limited,” Stuhlmann explains. The Dortmund company solved this problem with the help of a number of further developments, one being the specially designed central tunnel nozzle which will also be available to other projects in the future. The special air nozzles with their optimized perforated nozzle plates also help to create crease-free packs.

Furthermore, the KHS Kisters shrink packer sets a new benchmark when it comes to efficiency and saving on resources. One plus is that it can now process films of a much lower thickness. The machine also uses an optimum width of film per pack thanks to film web control. Badoit and its operators in particular also benefit from fully automatic film web control which is not only easy to handle but also ensures consistently high packaging quality. “With this new technical feature we were able to achieve the goal set by the customer, namely of providing optimum packaging quality while using the lowest possible amount of material,” smiles Stuhlmann. The team of experts also managed to boost the packer’s performance. On the further developed shrink packer up to 37,000 bottles per hour can be formed into packs of six on two lanes at the existing line speed.

The final acceptance test at the beginning of 2019 was performed to the full satisfaction of all involved. "KHS has met our requirements in every respect. The packaging quality has considerably improved compared to what it was,” praises Marie. Creasing and distorted print are now no longer a problem for the premium brand. “Thanks to the improved quality we’ve been able to double the size of the lettering on the packaging,” Marie relates. “This is a great advantage as regards product presentation. Our brand is now more visible to our customers than ever before.” The management of Danone Waters is also convinced by the final result. The French parent company considers the project to be an excellence reference for the entire company group.