LANXESS to become climate neutral by 2040 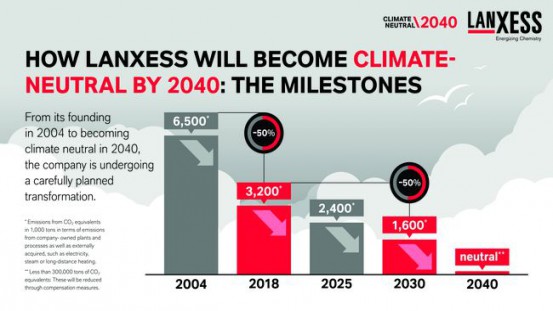 “Under the Paris agreement, the global community decided to limit global warming to less than two degrees. This requires massive efforts on the part of everyone involved. With our goal of achieving climate neutrality by 2040, we are fulfilling our responsibility as a global specialty chemicals company. At the same time, we will be an even more sustainable partner for our customers in the future,” said Matthias Zachert, Chairman of the Board of Management of LANXESS AG. Zachert also highlighted the long-term cost savings associated with a more efficient use of resources, saying that “climate protection is a business case”.

LANXESS is taking a three-pronged approach to become climate neutral by 2040.

·   Launch major impact projects for climate protection:
Over the next few years, LANXESS will put into action special projects to significantly lower greenhouse gases. For example, the Group is currently building a facility for the decomposition of nitrous oxide at its Antwerp, Belgium, site. The new facility will begin operations in 2020 and reduce annual greenhouse gas emissions by around 150,000 metric tons of CO2e. After a second expansion in 2023, CO2e emissions will fall by another 300,000 metric tons.
In addition, LANXESS is switching the entire energy supply at its Indian sites to renewable energy sources. There, the Group is massively expanding its supply of biomass and solar power and will no longer use coal or gas in the future. This will cut CO2e emissions by a further 150,000 metric tons from 2024. With these projects and other measures, LANXESS will decrease its CO2e emissions by a total of 800,000 metric tons by 2025, investing up to EUR 100 million in the process.

·    Decouple emissions and growth:
LANXESS is on growth course. But despite increasing production volumes, emissions of greenhouse gases in the individual business units are set to decline. In addition to technological efficiency, changes to governance instruments play a role, with the impact on the company’s carbon footprint becoming an investment criterion for organic growth and acquisitions. This gives business units that achieve better than average reductions in greenhouse gas emissions a direct financial advantage. Moreover, lowering CO2e will be introduced as an assessment criterion in the bonus system for managers.

·    Strengthen process and technological innovations:
LANXESS is revising many of its existing production processes in order to become climate neutral by 2040. For example, the Group will continue to improve its “Verbund” structures, e.g., when it comes to heat exchange between plants and air purification. Other procedures must first be developed on an industrial scale. The Group is therefore focussing its research more closely towards climate neutral process and technological innovation.

LANXESS is committed to the Paris agreement, in particular its requirement to reduce greenhouse gas emissions. Zachert believes that industry and government both share collective responsibility for this: “With our climate initiative, we are making an offer to policy makers. Nonetheless, we can accomplish this only if policies are put in place that create the right conditions.” Looking at the current legislative process to enact the German government’s climate package, Zachert said: “A commitment to climate protection must not jeopardize our competitiveness. The government must bear this in mind when designing the specifics of its climate package.”

In particular, Zachert urged the importance of avoiding a double burden on the industry under the working European emissions trading due to national systems. This is still the case in a current bill on a national emissions trading system for fuel emissions in Germany. “In the short term, we need to return to competitive energy prices. In the long term, we will be able to provide substantial climate neutral solutions only if sufficient renewable energy is available at industry-competitive prices.”

Approval procedures also need to be simplified and accelerated and financial and tax structures for future investments must be improved. “We are engaged in dialogue with policy makers on this and are happy to provide our expertise to support the political decision-making process,” said Zachert.

50 percent decrease in greenhouse gases since LANXESS was established

Since it was founded, LANXESS has made substantial progress on its way to becoming more environmentally friendly. Between 2004 and 2018, the Group halved its greenhouse gas emissions from around 6.5 million metric tons of CO2e to about 3.2 million metric tons. Substantial contribution came from a nitrous oxide reduction plant in Krefeld-Uerdingen, Germany, commissioned in 2009. The project has received multiple awards, including in the “365 Landmarks in the Land of Ideas” competition and the “VCI Responsible Care Award North Rhine-Westphalia”. The specialty chemicals company has also carried out numerous other projects to lower emissions at its sites around the world and supports local initiatives to tackle climate change. LANXESS has already achieved its previous targets of improving energy efficiency in conjunction with reducing specific CO2 emissions and emissions of volatile organic compounds by 25 percent each against 2015.

To measure its emissions, LANXESS looks at the emissions of greenhouse gases defined in the Kyoto Protocol and calculates their greenhouse effect in comparison to carbon dioxide (CO2e). The specialty chemicals company includes emissions from its own production (Scope 1) and from external energy sources (Scope 2) in the calculation.